Don’t Feed The Wildlife: Managing Trolls Who Comment on Your Social Media Posts

You know, the kind of person who is so envious of you that they’re forced to go out and find some way to tear you down or at least make themselves feel better by making you feel bad?

And then there are those people who comment without really reading what you wrote because they want a cheap laugh.

Yeah… those people are hurting too.

We’ve got some tips on how to deal with that particular brand of hostility – but first let’s take a look at what’s actually going on.

What is a troll?

In the first one, it’s a creature in Scandinavian folklore that lives in caves and under bridges.

It’s usually depicted as a grotesquely ugly humanoid with an appetite for mischief.

According to Wikipedia, this use of the word seems to have originated in 1873 when it appeared in Geijer & Afzelius’ History of Swedish Literature:

The name troll is also applied to other things that are tall and slimy.

In old ballads trolls are often described as hideous and hairy monsters.

Figuratively, “troll” is used to describe an obnoxious, ill-mannered person who thrives on causing trouble.

Today the word “troll” is used predominantly in the Internet sense of a person who posts commentary anonymously in online forums or chat rooms with the intent to cause trouble.

Trolls are people who post inflammatory statements with no real concern for how they affect others or if they cause any harm at all.

It’s a common misconception that trolls are just disgruntled people who don’t have a way to vent their anger about life in general.

While it’s true that there are many instances of people trying to get a reaction from you online, this type of troll isn’t interested in your reaction.

Trolls have no desire to understand or be understood.

They simply want to target their next victim and make an example out of them for everyone else to see.

Besides, they’re not really thinking at all.

The poster is mostly just typing random words after hearing those disturbing repetitive sounds when a computer keyboard is being pressed too fast.

The person who is actually typing the words might not even look at the screen while they do it. They may have been up all night, drinking something with a lot of caffeine in it, and may be on a sort of autopilot.

So what can be done?

Don’t get sucked into their game.

It’s easy to feel an urge to respond but that’s exactly what they want you to do!

To them, this is just some sort of sick entertainment for them and adrenaline rush for you.

If you feel tempted to respond, ask yourself, “Is it really worth the effort to take this troll down and make myself look like a fool in front of everyone else?”

Eventually the troll will get bored and go away.

And if they don’t? All you can do is ignore them until they give up.

If you’re going to ignore them, why let them bother you at all?  Block their comment so it doesn’t show up for everyone else to see.

That way the troll isn’t getting any sort of satisfaction out of bothering anyone and no one else has to see his or her nonsense either.

If there are more than one of them, you should ask the other people to take down their inflammatory statements so that it doesn’t continue to spread.

This is also a good way for others to see who these trolls are and to expose them for the attention-seeking jerks that they are.

If the troll won’t give up after you’ve tried the above suggestions, create a Reddit or Facebook post with screen shots showing all of their comments put together, along with a copy of the first sentence of each comment they made on your page and then post this on their respective site and tell them why you’re doing it.

Honestly, if you can’t find a way to resolve the problem without starting drama, it’s probably best to just remove the comment altogether and get back to appreciating your life and those who make it so wonderful for you.

The people who are constantly “trolling” other people on Facebook, Twitter and other social media sites are either:

Trolls thrive on a feeling of power…

The “high” they get from making other people feel bad is just as addictive as using drugs or alcohol.

It doesn’t matter if the troll has a “real” life or not, because he or she will always be unhappy.  They are forever looking to spread their misery to every corner of the internet because that’s all they have in life.

They feed off your anger and hatred and this is what gives them a sort of temporary (or eternal) satisfaction.

But what we really need to do as marketers and brands is understand the underlying causes here.

First of all, we must stop letting this happen. To understand why, let’s take a closer look at how and why this phenomenon started.

A while back I wrote about Internet Scraping and why it was important for brands to know who their target demographic was.

I won’t go into all of that now, but I will say that the explosion of hobbies and the sharing of information online has allowed people to find a niche for themselves.

Hobby-based niches have led to Facebook groups being created which have in turn spawned Reddit forums and even their own websites.

The Trolling phenomena has been around since the beginning of Internet forums, but it wasn’t until people started creating forums on their own that they really began to be disruptive.

Once people were able to use the Internet as a platform for creativity and individuality, they could also use it as a bully pulpit for making others feel bad about themselves.

For example, when I was a kid I used to play in the woods, which is like being part of a community.

When we had “adventure club” as kids, we had a place where we could go and have fun with our friends but also learn new things about ourselves. It was how we grew up.

Later on in life I found facebook and you can actually play games there, which is how people who never even met each other could interact when they are far away from one another.

When you’re in a “community” like this, it allows people to self-select.

But when someone starts talking about how they don’t have enough friends or something that has nothing to do with the community at all, it becomes toxic.

Secondly, the Internet has also introduced people to the creation of “memes”.

The message itself doesn’t have to have any actual meaning behind it because the way it is disseminated makes it much more important than it actually is.

These kinds of messages are used by people who just want to make fun of others or by extremists that are looking for attention, but they can also be used to create positive change in communities and change how we think about things we think should be changed.

Which can sometimes be hilarious, and even get your message across more easily than an entire essay.

However, it can have a negative effect on your brand as well – given, someone takes the time to go out of there way and make one of you / your brand.

Trolls exist in every field from marketing to medicine (and everywhere in between).

You should be fine as long as you steer clear of the trolls, don’t take it personally and don’t feed the troll (just ignore them).

To quote another wise woman, “don’t stop believing.” If you do stumble across them, or they you, just block or unfollow them and continue to do yourself proud. 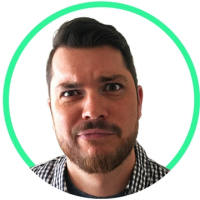 Sam Sprague Administrator
CEO & Founder , Sprague Media
Sam is the Founder & CEO of Sprague Media. He has over 10 years of experience in the Digital & Social Media Marketing world, on the agency and client-side. A Marine Veteran and Father, Sam is an avid Football and Basketball connoisseur who likes nothing better than to spend quarantine watching games!
web
https://spraguemedia.com
email
[email protected]
follow me

Sign up and stay up-to-date with our latest posts & content, There’s a lot of awesomeness to come here in 2020!

The latest news, articles, and resources,
sent to your inbox.